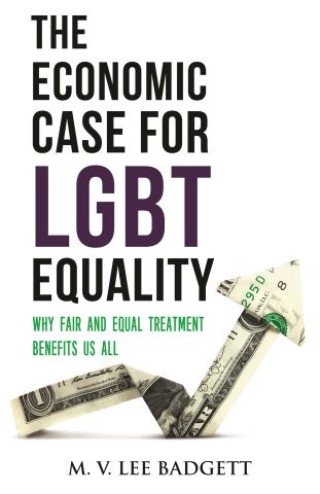 The Economic Case for LGBT Equality

Why Fair and Equal Treatment Benefits Us All

We know that homophobia harms LGBT individuals in many ways, but economist M. V. Lee Badgett argues that in addition to moral and human rights reasons for equality, we can now also make a financial argument. Finding that homophobia and transphobia cost 1% or more of a country’s GDP, Badgett expertly uses recent research and statistics to analyze how these hostile practices and environments affect both the US and global economies.

LGBT equality remains a persistent and pertinent issue. The continued passing of discriminatory laws, people being fired from jobs for their sexual orientation and/or gender identity, harassment and bullying in school, violence and hate crimes on the streets, exclusion from intolerant families, and health effects of stigma all make it incredibly difficult to live a good life. Examining the consequences of anti-LGBT practices across multiple countries, including the US, Canada, the UK, Australia, India and the Philippines, Badgett reveals the expensive repercussions of hate and discrimination, and how our economy loses when we miss out on the full benefit of LGBT people’s potential contributions.